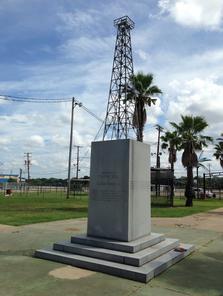 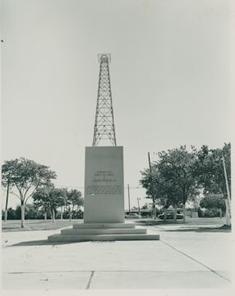 Located on the grounds of the State Fair Grounds in Shreveport, LA.

A dam was built in 1914, which caused the water levels to rise, killing the mussels and the pearl industry.

In 1904 Savage Brothers and Morrical drilled the first oil well.  After the discovery of oil in 1905, the flag stop was destined to become a "boom town".  Three years later a man named Howard Hughes (the father of the famous Howard Hughes) convinced the government to locate a post office in Oil City.  He is also given credit for changing the name to Oil City.

By 1910 the oil business was on its feet, with Gulf Oil drilling the first off-shore well in that year.  The city boasted a population of 25,000.  Land sales went from fifty cents an acre to $500 an acre within a year.  25,000 people populated the city, and all the land had been leased.  The men in the oil field camps generally worked 12 hour shifts each day, seven days a week.  They slept in tents at the camps.  Usually their families did not accompany them.  The community supplied the well workers with meals and housing.  Passenger trains, operated by the Kansas City Southern Railroad, ran between the fields and Shreveport.

Oil City had wooden sidewalks and muddy streets with hitching posts for horses.  Even the hotel in town was a tent for a while.  There was a modest store that also was a billiard parlor, a post office, and sometimes an auditorium.  The passenger and freight stations, along with the Kansas City Southern telegraph office were housed in freight cars.  The town became the first "wild cat town" in the Ark-La-Tex, as tough characters and a shack-covered red light district known as Reno Hill gave the town a rough and tumble atmosphere.

In 1907 J.B.McCann who was an employee of the J.M. Guffey Petroleum Company (Gulf Oil Company), traced the flow of escaping natural gas acrossss the water of Caddo Lake by boat.  Often, the escaping gas was so great that McCann could ignite the vapor and simply follow the flames across the lake.  McCann leased nearly one thousand acres for Gulf Oil.  One of Gulf's production superintendents and his assistant planned to construct permanent drilling platforms on the lake, with one platform every six hundred feet on each ten acre site.  Once a site was staked, 140 cypress logs would be cut and barged to the location.  Driven into the lake bottom they would be used to support the drilling platform and separate boiler setting.  In 1911 Louisiana's firsst over water well, the Ferry Lake No. 1, was completed over Caddo Lake.  This technology led to the offshore production in the Gulf of Mexico.

In the center of town was a lone tree, which law enforcement officials used to tie up drunks while they sobered up.  A restaurant, gambling houses, saloons, and the Stag Hotel stood across the railroad tracks on the east side, and a two story house in Reno Hill served as a dance hall.  Reno Hill was the "red light" district where there were 5 houses of ill-repute that according to legend, employed 40-50 women.  The sheriff of Oil City closed Reno Hill in 1917.

Oil City was described as being so wild that the crew on the passenger trains was advised to pull the window shades on the trains cars to keep the women and children from seeing the fights and murders that occurred on the streets.

Warehouses, stores, hotels, and a movie theater eventually moved into the town.  Fire destroyed twelve buildings in 1917, and fires in the 1920's and in 1938 destroyed the subsequent buildings.

The Trees City Office and Bank Building, built in 1910 as the headquarters and bank building of the J.C. Trees Oil Company, was moved in 1983 to its present location at 200 South Land Avenue in Oil City.  The three room building is one of the few remaining in the state that has an association with the oil industry.  The structure was maintained by the Caddo-Pine Island Oil and Historical Museum formed in 1969, but is now under the auspices of the Secretary of State/Louisiana State Oil and Gas Museum.  Within the museum complex is an oil derrick donated my Texaco, and a caboose from KCS.

The Caddo Indians (Kadohadacho) roamed the forest lands in this area in a much earlier time. Steamboats plied the chain of lakes, bayous, and Red River,  transporting passengers, laborers, cotton and booze. The area had a large timber industry long before the oil came.  A large amount of fresh water pearls were harvested out of Caddo Lake.

Oil City was founded as a flag stop along the Kansas City Southern Railroad.  At the time, the town was known as Ananias, a name that it supposedly had been given by some Shreveport men who owned a hunting and fishing club on Caddo Lake at what is known as "Kool Point".  Ananias, along with Surrey and Caddo City, were absorbed into Oil City.  These were stops along the railroad line, which had come through the area in 1895.

Early on, most settlers were fishermen, trappers, and farmers.  Others took part in the timber industry, and another group harvested fresh water pearls after they were discovered in mussels in 1909. 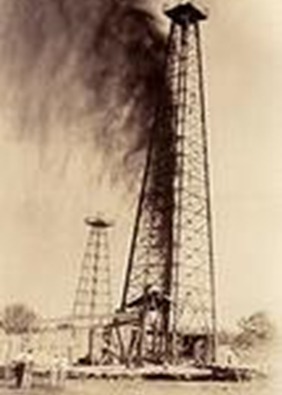